BEIJING — A rap group backed by China's government is warning South Korea in a music video that "you're going too far" with the deployment of a U.S. missile defense system, as Beijing seeks to bring its state-supported cultural forces to bear in the international dispute.

A member of the group CD REV said government officials worked with them on the video and helped to promote it on foreign websites, many of which are blocked in China by official censors emboldened by the ruling Communist Party's warnings against foreign "cultural infiltration."

In the song, group members chant that "about THAAD we say no, no, no," a reference to the U.S. Army's missile defense system formally known as Terminal High Altitude Area Defense. 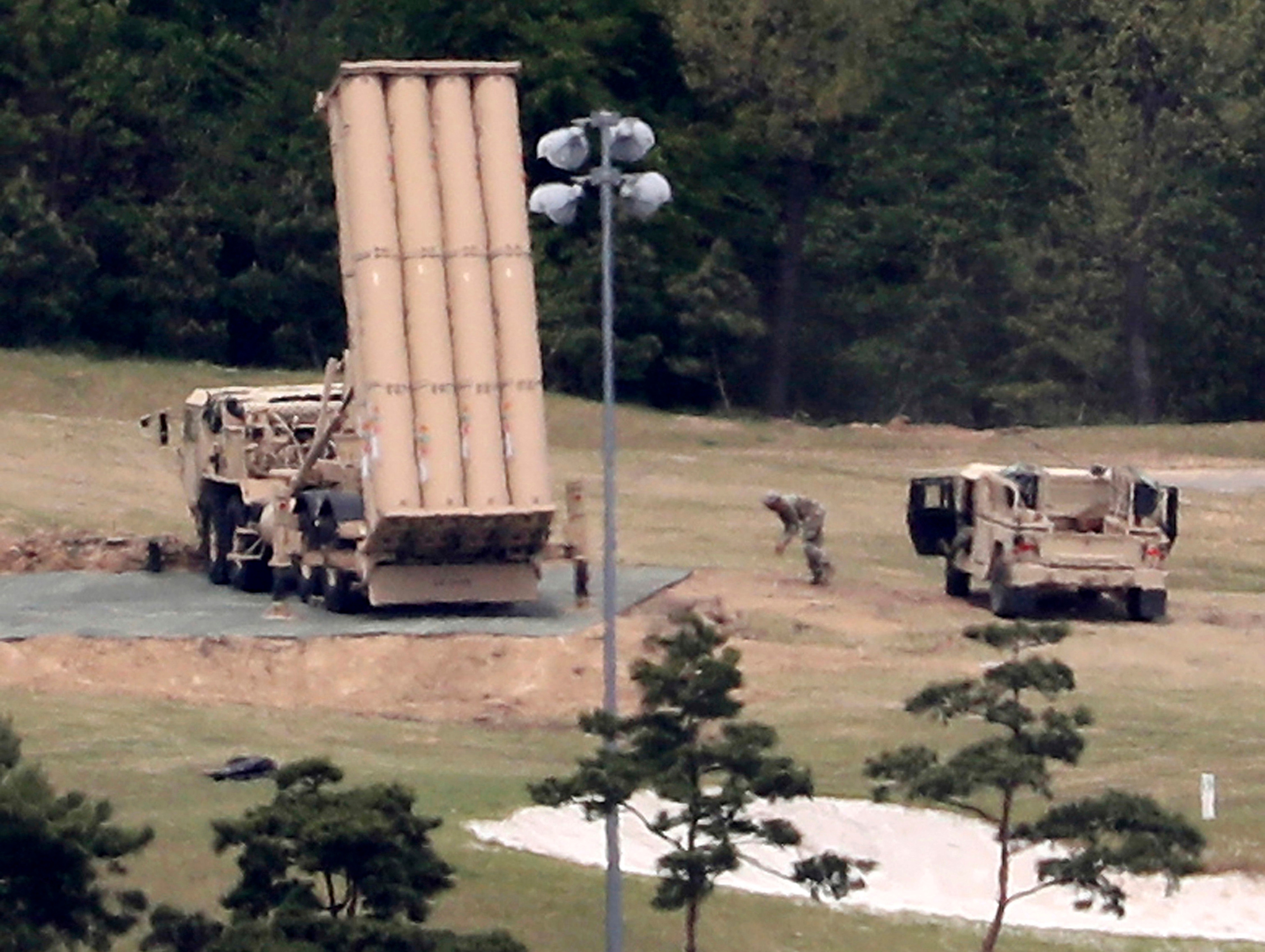 In this Tuesday, May 2, 2017 file photo, a U.S. missile defense system called Terminal High Altitude Area Defense, or THAAD, is installed at a golf course in Seongju, South Korea. Clashes between residents and police over the deployment of an advanced U.S. anti-missile system highlight a divisive issue ahead of South Korea’s presidential election on May 9.
Photo Credit: Kim Jun-beom/Yonhap via AP
Later in the song, they refer to South Korea, saying, "this time, kid, you're going too far" and "your big brother's annoyed," a nod to China's view of itself as the pre-eminent political and economic power in northeast Asia.

Beijing vehemently opposes the missile shield, saying its powerful radar will allow it to monitor missile launches, aircraft flights and other sensitive activities in northeastern China. South Korea and the U.S. say it is necessary to guard against North Korea's missile and nuclear weapons activities that threaten South Korea, Japan, U.S. territories and possibly even the continental United States.

CD REV's Wang Zixin told The Associated Press that the group hopes to rally Chinese worldwide against the deployment of THAAD and demonstrate China's "tough stance" on the issue.

"We would see government reports and comments, but at the same time, we see the whole event from the position of Chinese," Wang said.

In the video, the group also takes shots at what Wang referred to as "vulgar behavior" within China, such as vandalism against South Korean-made Hyundai vehicles.

The video — viewed by Wednesday more than 300,000 times on Facebook and Twitter and almost 2.7 million times on the Chinese video-posting site Maiopai — represents the latest example of China's use of non-diplomatic channels to broadcast its displeasure with South Korea.

Last year, there were reports that China had stopped giving approval to performers of Korean pop music, or "K-pop," to play shows in China, on the heels of Seoul signing the agreement to host THAAD. In March, South Korean officials voiced concerns that Beijing was limiting tourism to their country as an unofficial sanction.

In this undated image made from video, members of CD REV chant about THAAD, the U.S. Army's missile defense system formally known as Terminal High Altitude Area Defense. A rap group backed by China's government is warning South Korea in a music video that "you're going too far" with the deployment of a U.S. missile defense system, as Beijing seeks to bring its state-supported cultural forces to bear in the international dispute.

South Korean retailer Lotte, which provided the land for the THAAD deployment, has also been boycotted by Chinese customers and seen construction halted on an amusement park it was building in northeastern China.

Such moves underscore a willingness on the part of China's Communist Party leaders to fan the flames of anti-South Korea sentiment, said Korea expert Sung-Yoon Lee of Tufts University in Massachusetts.

"THAAD retaliation is a Chinese government-engineered project," Lee said. "It can be controlled and reversed by Beijing. ... The Chinese public has no interest in the complexities of missile defense systems."

South Korea's foreign ministry did not immediately respond to questions about the song, and the video did not appear to garner much attention on the country's social media platforms.

A special envoy representing Moon is due to visit China on Thursday for talks on THAAD and the overall bilateral relationship.

The Supreme Court allowed a former state trooper to sue Texas over his claim that he was forced out of his job when he returned from Army service in Iraq.

National Guardsmen may soon use personal electronics in deployments

“Bring Your Own Approved Device” initiative would allow guardsmen to use personal mobile equipment to perform the same functions in the field that they would otherwise carry out at a desktop in their offices.

Questions about the Hatch Act often surface when political discourse runs especially hot. How you can determine what constitutes inappropriate political activity in the government workplace.

Officials estimate they may have 100,000 fewer poll workers than they need to conduct upcoming state and local elections.

The ruling, which was declared after a draft decision was leaked in May, overturns decades of precedent and permits state-by-state decisions on limiting or banning abortions.

Is Juneteenth a federal holiday?

Trump: Postal Service must charge Amazon more, or no loan