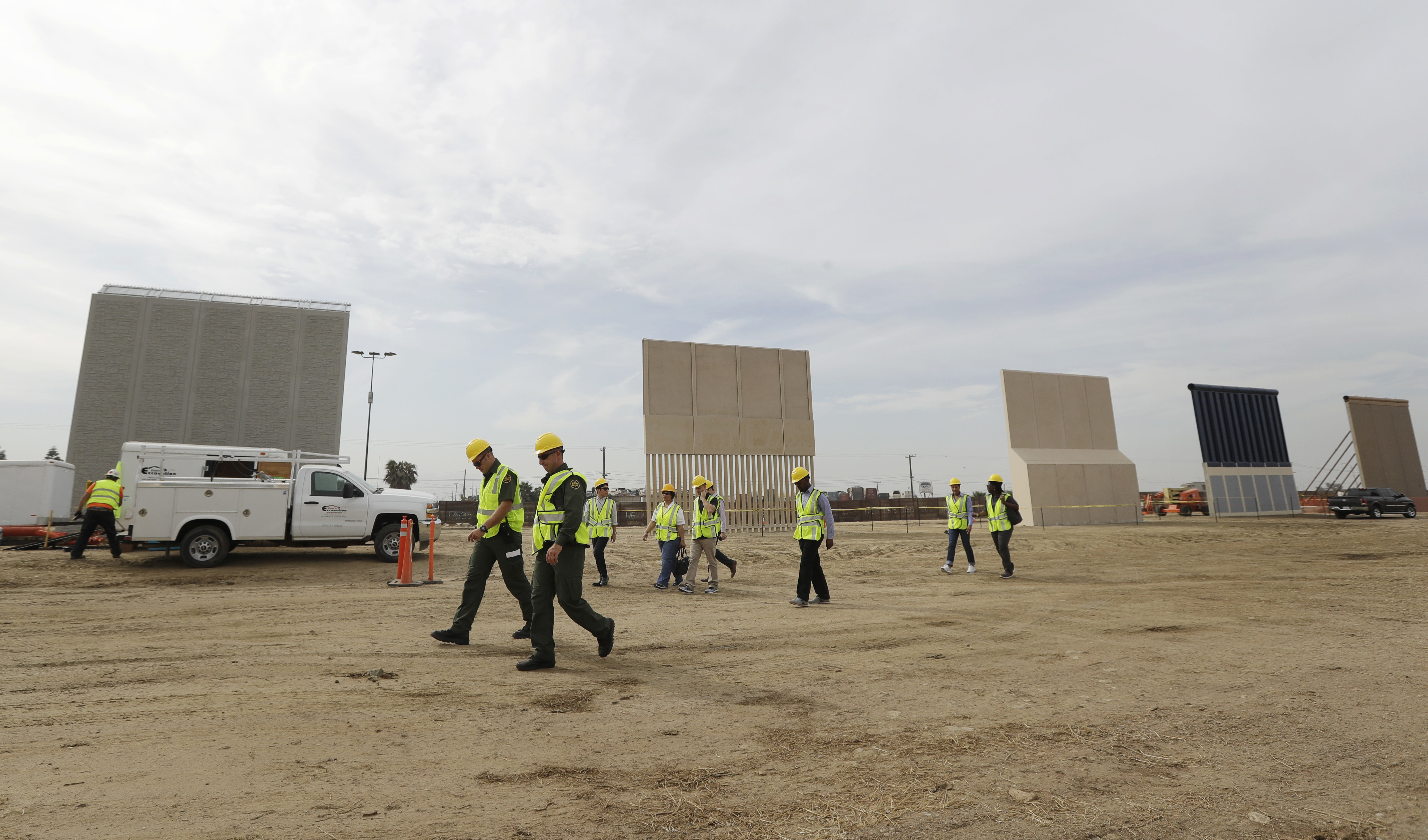 Crews work on a border wall prototype near the border with Tijuana, Mexico, on Oct. 19, 2017, in San Diego. Companies are nearing an Oct. 26 deadline to finish building eight prototypes of President Donald Trump's proposed border wall with Mexico. (Gregory Bull/AP)
2 of 9 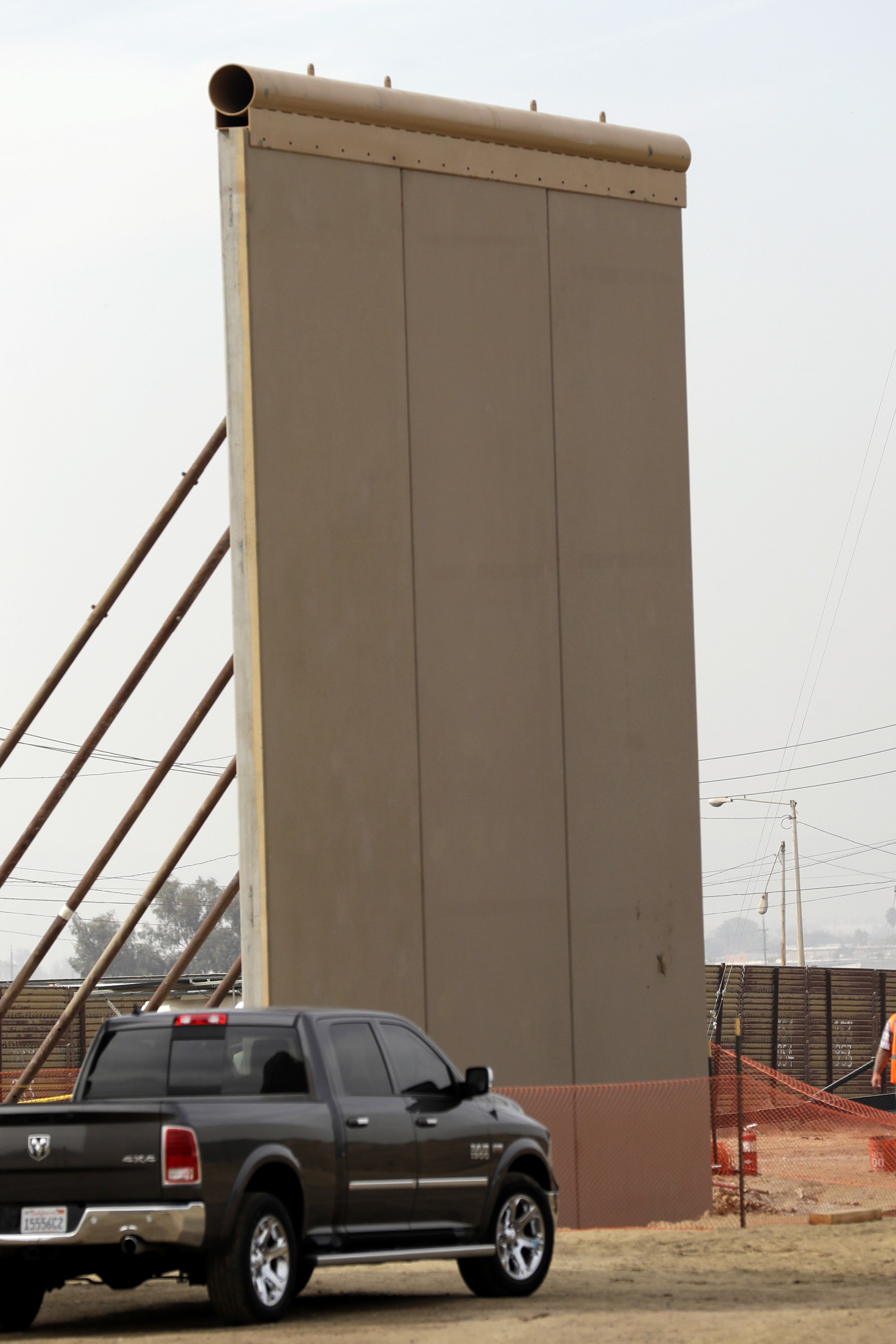 W.G. Yates & Sons Construction Company, based in Philadelphia, Miss., offered a wall that was darker brown than other prototypes and topped with a round beam. Its concrete panel has a plain face. Its contract is valued at $453,548. (Gregory Bull/AP)
3 of 9 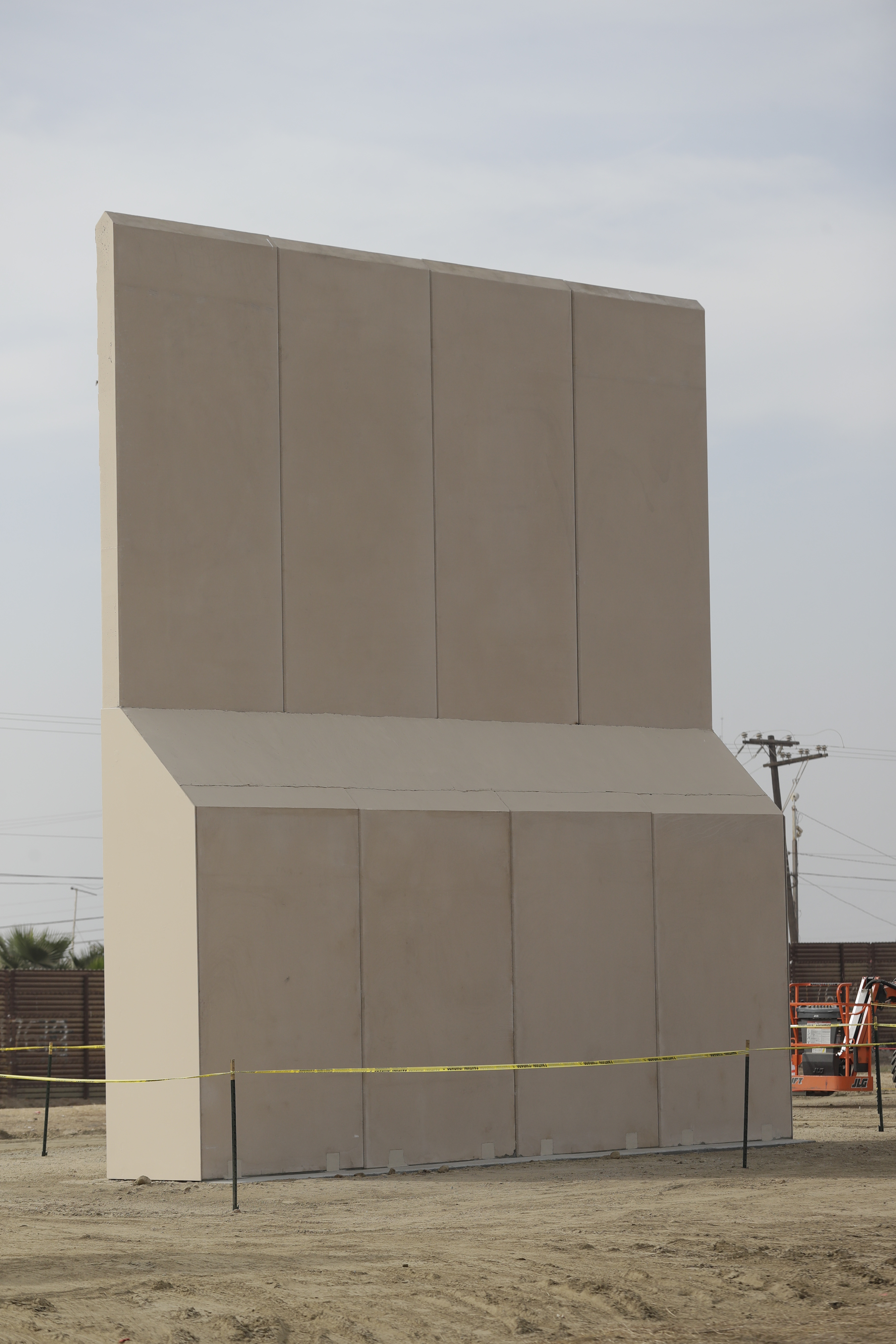 Cadell Construction Company, based in Montgomery, Ala., offered a tan concrete wall at a contract value of $344,000. It's thick at the bottom and narrows considerably toward the pointed top. (Gregory Bull/AP)
4 of 9 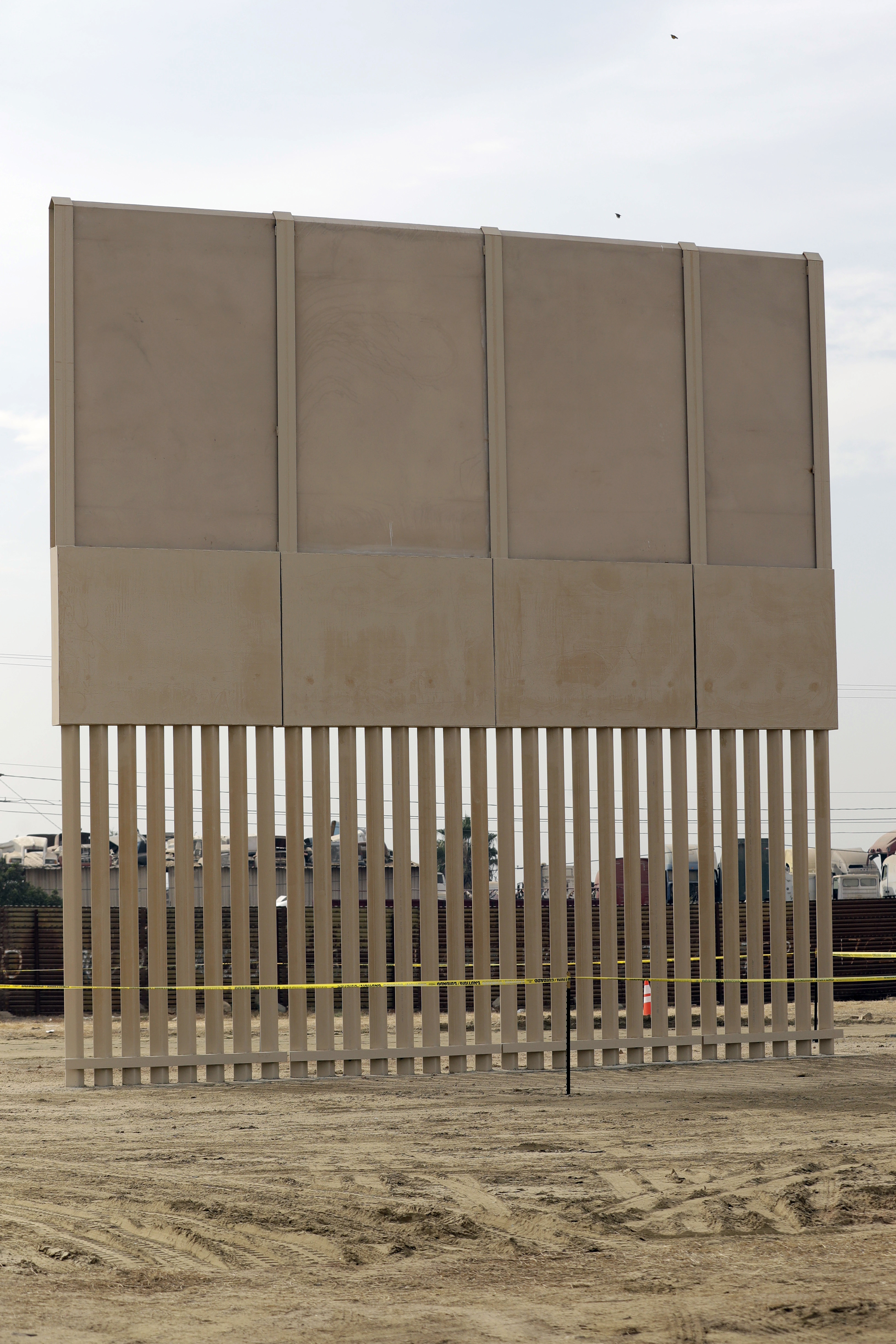 Cadell Construction Company, based in Montgomery, Ala., also offered a tan wall with metal poles on the bottom, a metal plate in the middle and a concrete block on top. This version's contract is valued at $320,000. (Gregory Bull/AP)
5 of 9 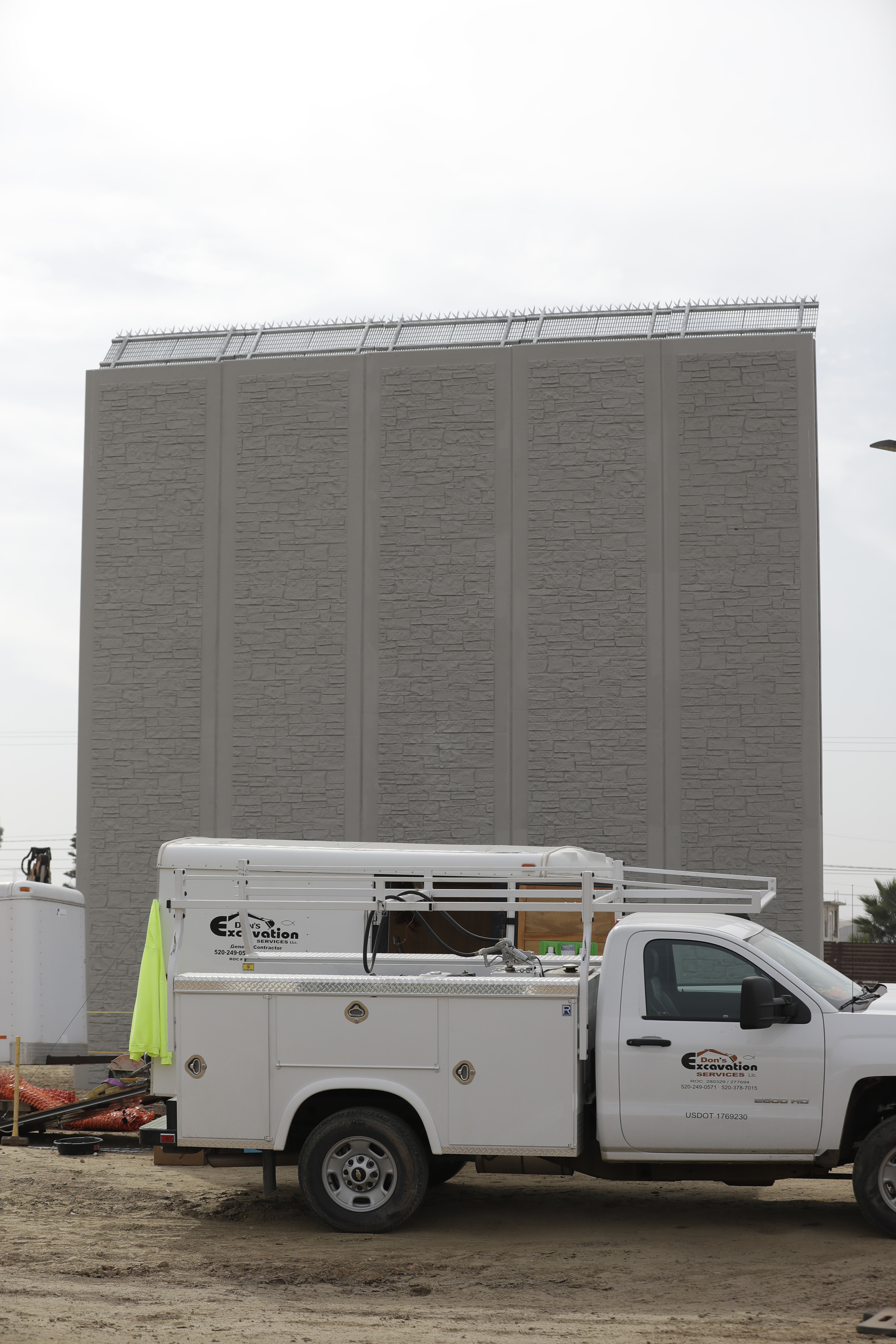 The wall by Texas Sterling Construction Company, based in Houston, Texas, has a contract value of $470,000. The gray surface of the U.S. side is stamped with patterns of different-sized bricks, like a driveway or sidewalk at an upscale home. There is a steel plate on top with prongs that feature at three metal spikes, resembling an agave plant. (Gregory Bull/AP)
6 of 9 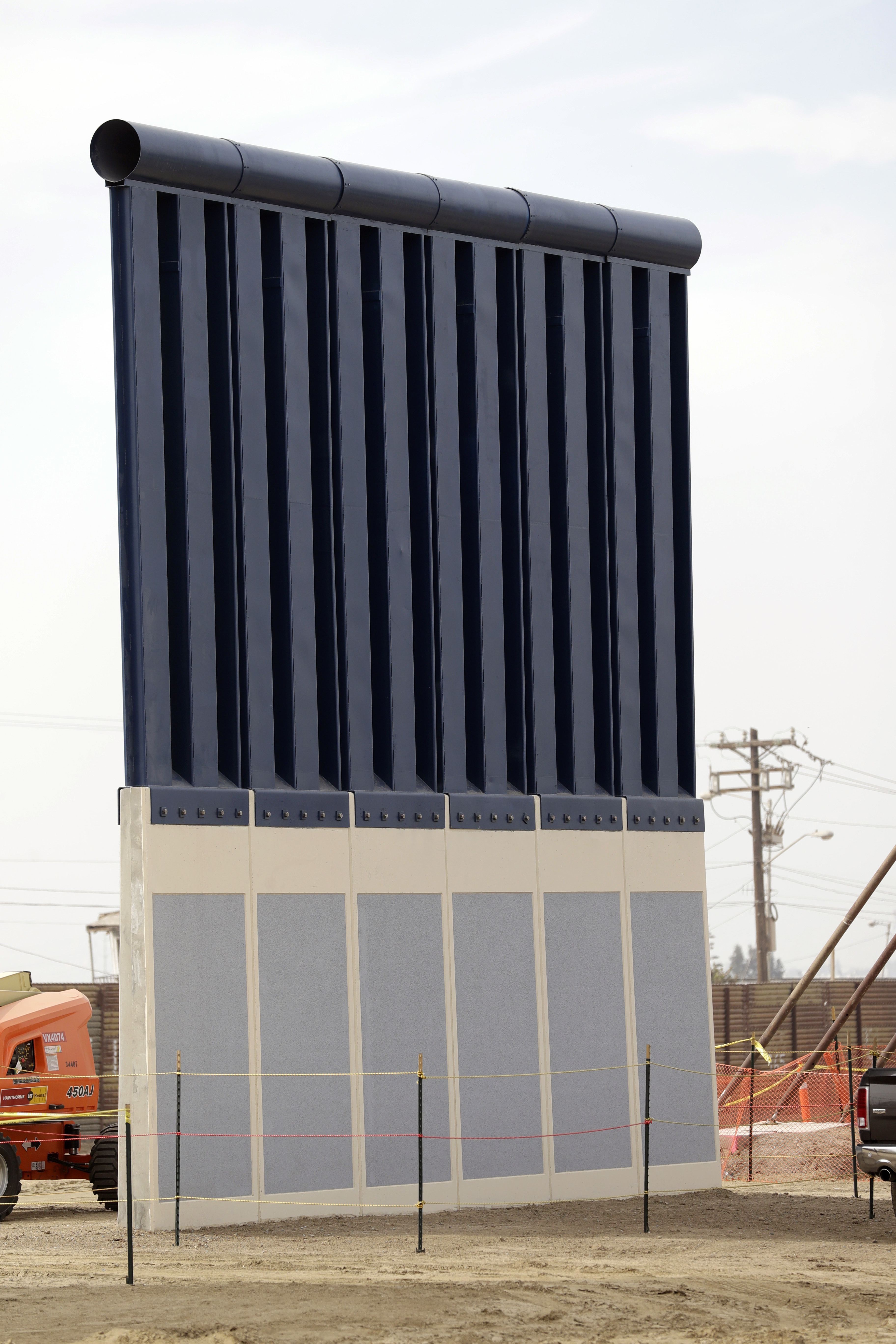 Elta North America Inc., based in Annapolis Junction, Md., build a prototype of solid metal. With a contract valued at $406,319, it features six light blue squares with white trim on the bottom third, topped by dark blue beams and metal plates. Elta is a large Israeli defense contractor owned by state-run Israel Aerospace Industries. The company, which makes radar and other gear, opened its new U.S. headquarters in Maryland in May. (Gregory Bull/AP)
7 of 9 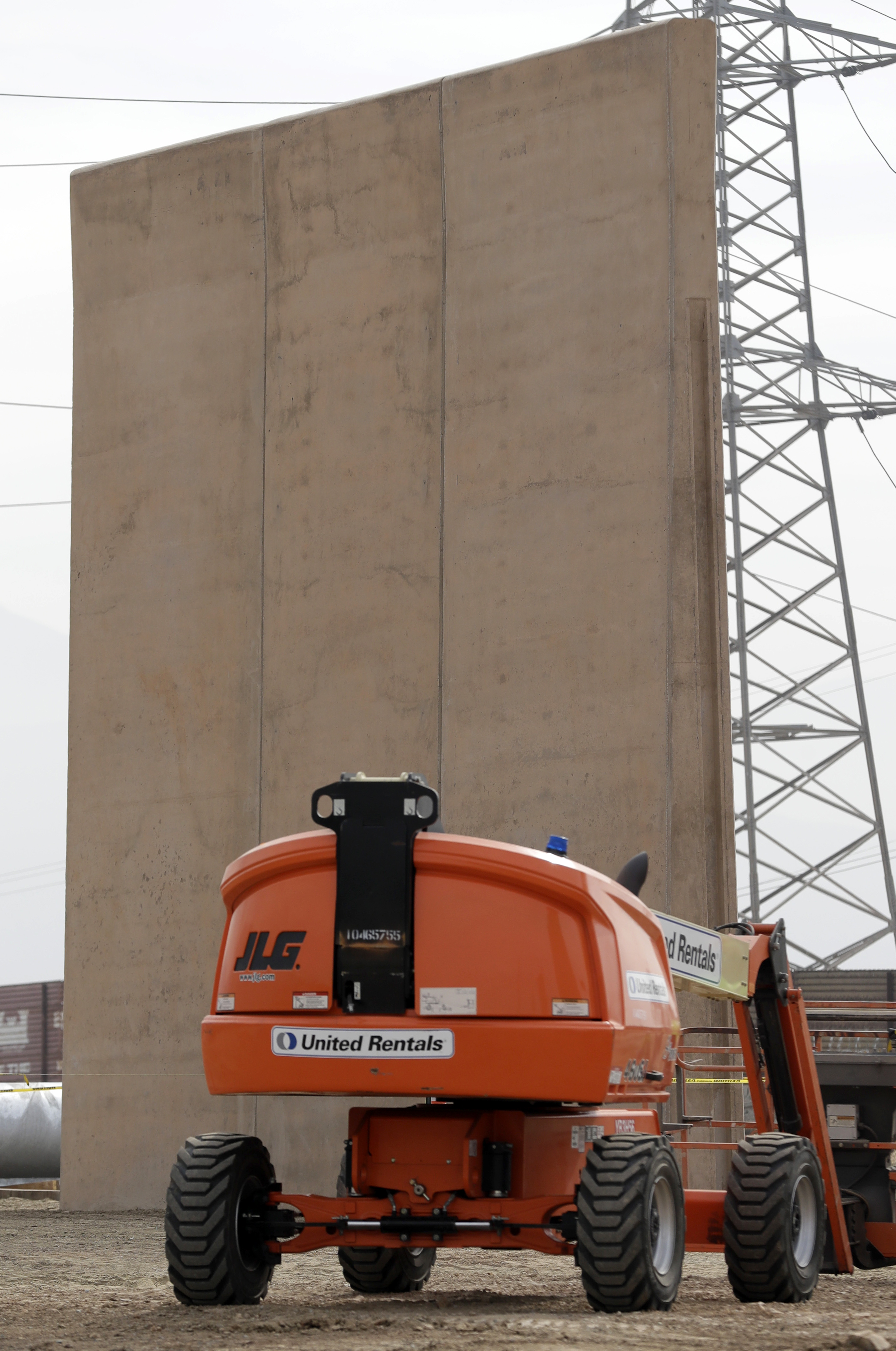 Fisher Sand & Gravel Company, based in Tempe, Ariz., is the only company that built its prototype entirely on site. With a contract valued at $365,000, its tan surface gradually narrows toward the top, like a long triangle. (Gregory Bull/AP)
8 of 9 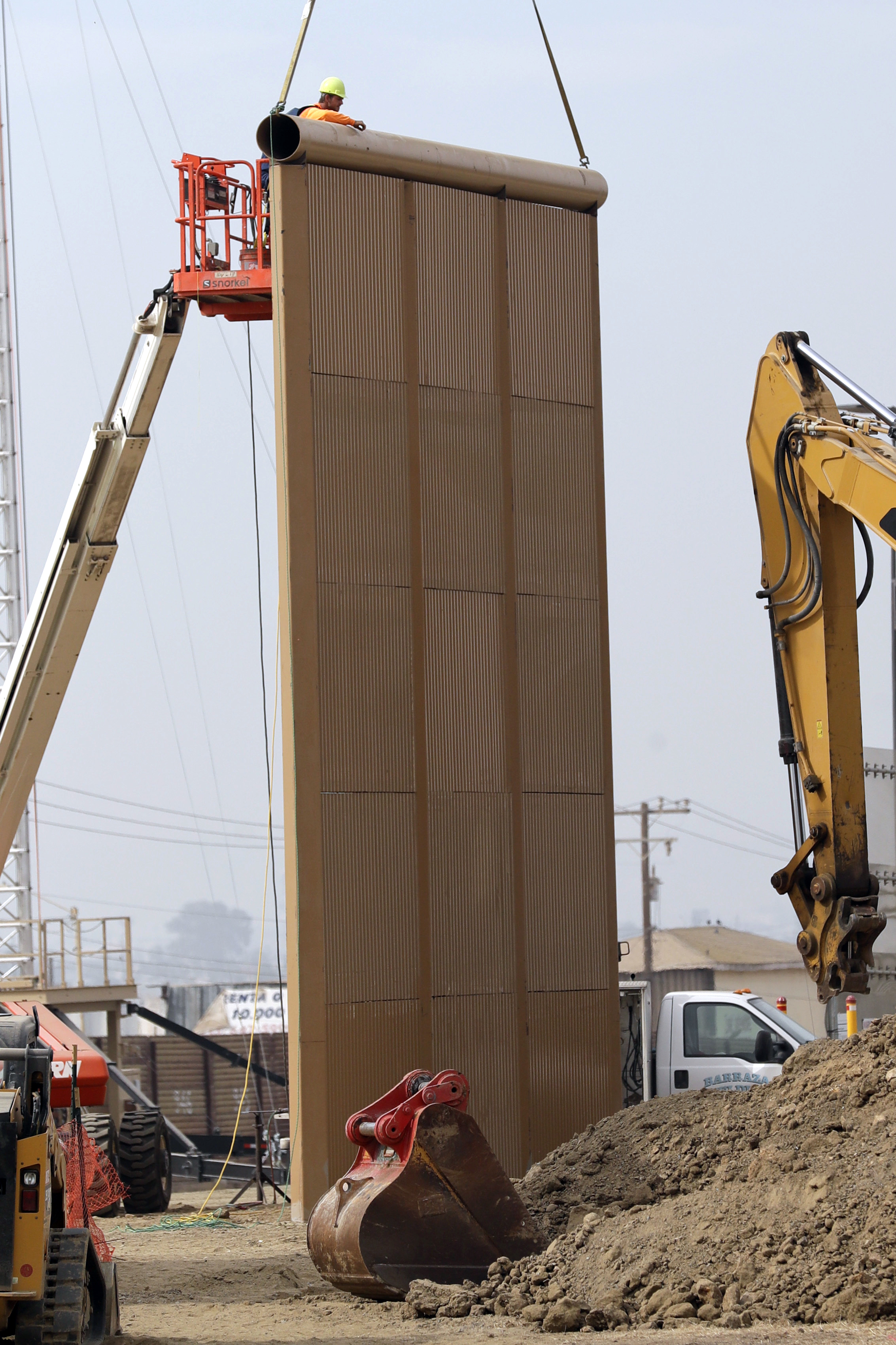 W.G. Yates & Sons Construction Company, based in Philadelphia, Miss., offered a wall that was darker brown than other prototypes and topped with a round beam. This metal one has a corrugated surface. It's contract is valued at $458,103. (Gregory Bull/AP)
9 of 9 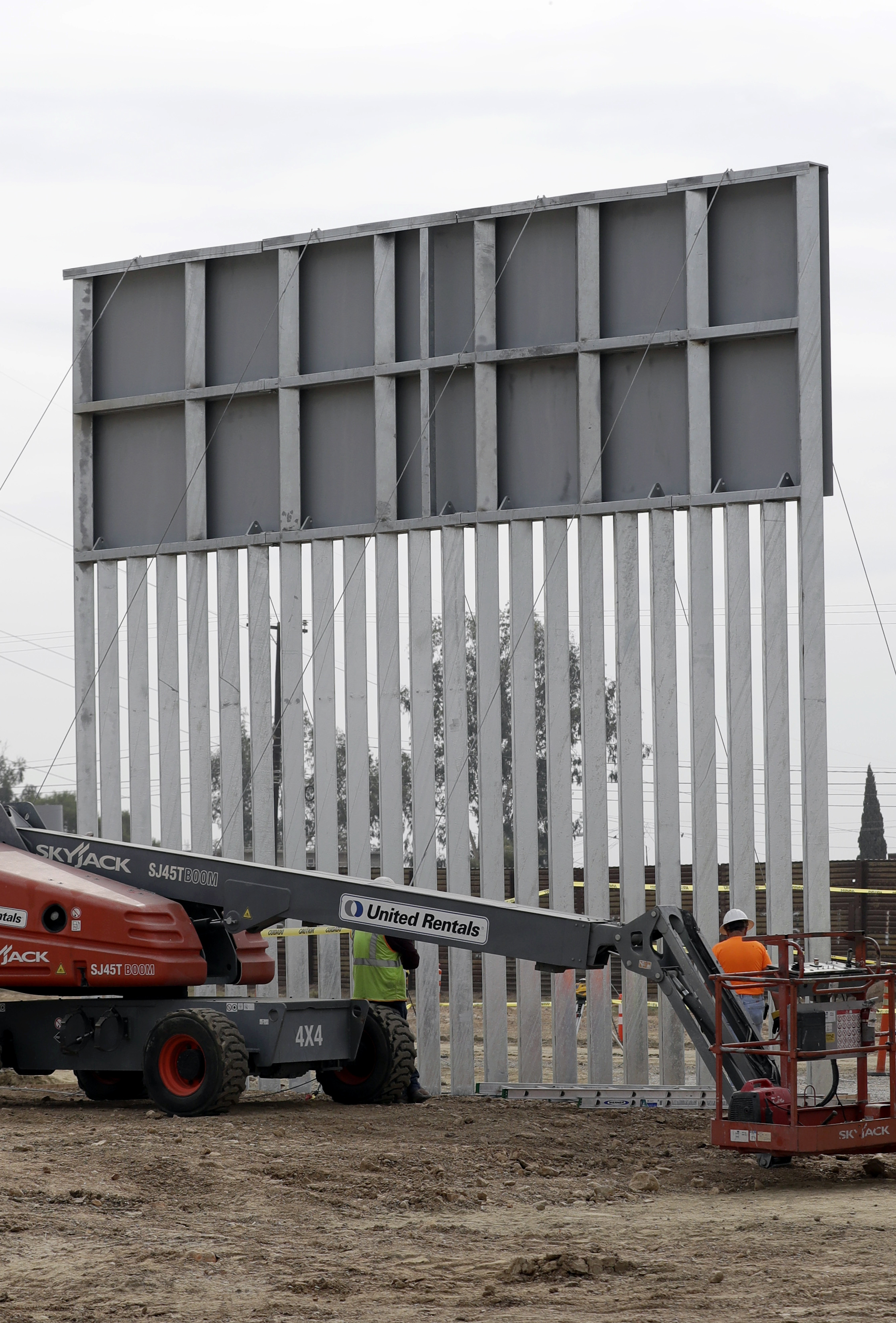 KWR Construction Inc., located in Sierra Vista, Ariz., is offering a wall with a contract value of $486,411. Its gray metal columns are topped with a large metal plate. The small, Hispanic-owned company counts the Homeland Security, Defense and Interior departments among its largest customers. (Gregory Bull/AP)

Military special forces based in Florida and U.S. Customs and Border Protection special units spent three weeks trying to breach and scale the eight models in San Diego, using jackhammers, saws, torches and other tools and climbing devices, said the official, who spoke on condition of anonymity because the information was not authorized for public release.

A Customs and Border Protection report on the tests identifies strengths and flaws of each design but does not pick an overall winner or rank them, though it does point to see-through steel barriers topped by concrete as the best overall design, the official said.

The report recommends combining elements of each, depending on the terrain. The official likened it to a Lego design, pulling pieces from different prototypes.

Carlos Diaz, a spokesman for Customs and Border Protection, said the agency is still in “the testing phase” and that results are being evaluated. He said combining elements of different prototypes instead of picking a winner is consistent with previous statements by officials. He noted that the agency said in its bidding guidelines that a minimum height of 18 feet (5.4 meters) would be a key characteristic. He said he did not have additional details on test results.

Contractors were awarded between $300,000 and $500,000 for each prototype. Prototypes were built last fall to guide future construction of one of Trump’s signature campaign pledges. Four were concrete and four were made of other materials.

Ronald Vitiello, the agency’s acting deputy commissioner, said after visiting the prototypes in October that he was struck most by the 30-foot (9.1-meter) heights, which are significantly higher than existing barriers. Taller barriers are undoubtedly more effective, but whether the cost is justified will be up for debate.

The highly trained testers scaled 16 to 20 feet (4.9 to 6.1 meters) unassisted but needed help after that, said the official who described the assaults on the wall prototypes to the AP. Testers also expressed safety concerns about getting down from 30 feet.

Only once did a tester manage to land a hook on top of the wall without help, the official said. Tubes atop some models repelled climbing devices but wouldn’t work in more mountainous areas because the terrain is too jagged.

The report favors steel at ground level because agents can see what is happening on the other side and holes can more easily be patched, the official said. With concrete, large slabs have to be replaced for even small breaches, which is time-consuming and expensive. Topping the steel with smooth concrete surfaces helps prevent climbing.

Customs and Border Protection leaders were scheduled to be briefed on the findings this week amid intensifying discussions between the White House and Congress on immigration legislation to avert a government shutdown and renew protection for about 800,000 young immigrants who were temporarily shielded from deportation under an Obama-era program, Deferred Action for Childhood Arrivals, which is scheduled to end in March.

The administration has insisted wall funding be part of any immigration deal but Trump has been unclear about how long the wall would be and how it should be designed. The administration has asked for $1.6 billion this year to build or replace 74 miles (118.4 kilometers) of barriers in Texas’ Rio Grande Valley and San Diego and plans to request another $1.6 billion next year.

A proposal by Customs and Border Protection calls for spending $18 billion over 10 years to extend barriers to cover nearly half the border, though it is unclear if Trump supports that plan. The agency proposes 316 miles (505 kilometers) of additional barrier by September 2027, bringing total coverage to 970 miles (1,552 kilometers). It also seeks 407 miles (651 kilometers) of replacement or secondary fencing.

Mexico has steadfastly rejected Trump’s demand that it pay for the wall.

Contracts to do work on that scale would be hugely lucrative, and the prototypes, spaced tightly together in a remote part of San Diego, have captured widespread attention, including from architecture critics. W.G. Yates & Sons Construction Co. of Philadelphia, Mississippi, and Caddell Construction Co. of Montgomery, Alabama, built one concrete model and one of other materials.

Vitiello said in October that the testing could last up to two months and lead to officials to conclude that elements of several designs should be merged to create effective walls, raising the possibility of no winner or winners.

Budgeting is vital to managing your money and doesn't have to be complicated. Taking the time to examine your monthly expenses can be an important first step. Personal finance expert Jeanette Mack explains.

Money Minute: How to decide whether to take advantage of a balance transfer