No agility without stability in acquisition reform

By
Jordon Sims is director of organization relations and programs for the Project Management Institute. He formerly served as an active-duty submarine officer in the U.S. Navy, and he has held numerous positions within the Pentagon, Capitol Hill (appropriations), and Energy Department.

The embrace of prototyping is a smart move and echoes other approaches to increase increasing ​agility by the federal government, the private sector and other public sector organizations. Innovators such as Google have adopted and adapted prototyping to their innovation efforts to increase success of project and program outcomes in a process Google calls "pretotyping" which is now appearing in many industries globally.

As I’ve noted before, interest in agile practices is growing, especially within the federal government. But transforming people and processes is no easy feat. What’s required is an approach that aligns initiatives with objectives. Agile project management is most successful when it takes standards-based project management foundations and frameworks to make acquisition agile and thereby more effective and efficient.

Since,​ project management is the application of knowledge, skills, tools, and techniques to project activities to meet project requirements,;and​ Agile allows teams to simplify and streamline a project piece-by-piece and rapidly and iteratively ​make adjustments as needed. Agile is often introduced as a way to speed up the phases of a project without losing the foundation of formal project management.

PMI’s Pulse of the Profession® in-depth report, Capturing the Value of Project Management Through Organizational Agility, shows that organizations with project teams that are more collaborative, communicative and flexible have significantly better project outcomes—81 percent of their projects meet original goals versus 53 percent of those with project teams who rank lower on these three attributes. They also outperform on staying within budget and achieving ROI.

The data reveals that the most important characteristics of an agile organization include: flexibility and adaptability, open communication, openness to change, empowered team members, experiential learning, rapid decision making, and a strong customer focus.

So what will the defense acquisition enterprise need to do to respond more quickly and nimbly throughout the acquisitions process? There are five key elements, as depicted in the following graphic:

The last element in this framework is the one at the heart of the House Armed Services Committee hearing. Adaptability is a crucial element in acquisition reform, but it can’t succeed in a vacuum. In addition, a new culture, aligned leaders, the right talent and a new-found flexibility is needed to achieve the goal of significantly reducing acquisition cycles. 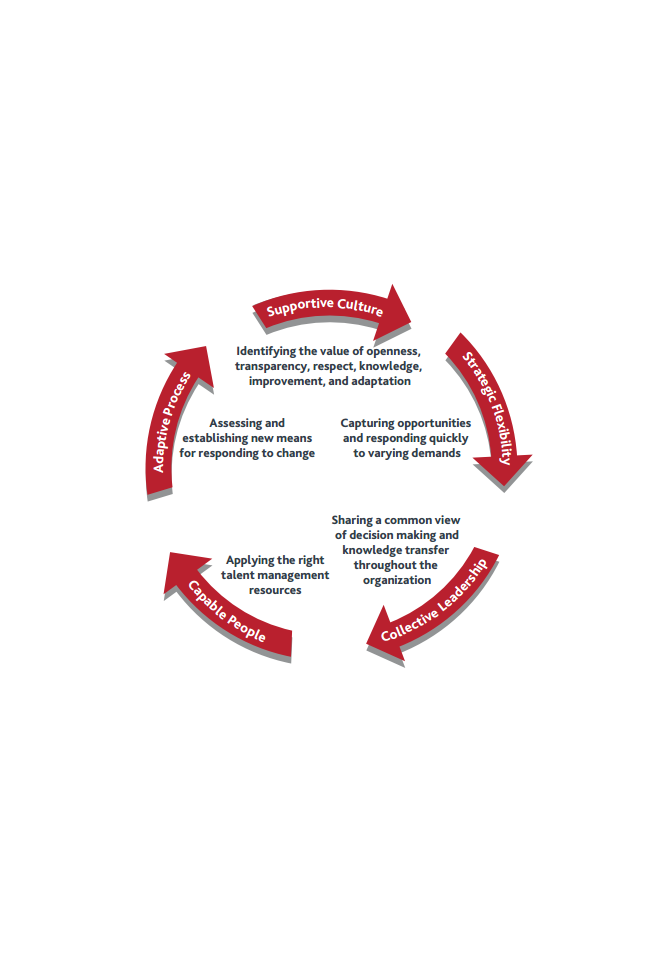 The five key elements of the acquisitions process.
Photo Credit: Source: PMI Pulse of the Profession® Capturing the Value of Project Management Through Organizational Agility
Project and program management foundational ​frameworks make agile approaches successful by providing stability. Don’t just take my word for it; as McKinsey & Company points out, "agility rhymes with stability." Although we all usually and exclusively think flexibility and speed when we think of agility—think of an Olympic gymnast—agility requires a steady foundation to support all that speed and change. The right project management framework that can adapt to the dynamic needs of the marketplace (in this case, the defense acquisition ecosystem) provides the stability that makes agility possible.

In 2016, it is clear that agile is going to be a major focus in the U.S. defense world. The FY 2016 National Defense Authorization Act (NDAA) introduced changes to the way the Department of Defense (DOD) acquires goods and services, affecting the acquisition workforce and acquisition strategies for each program, and rebalancing the responsibilities between the armed services and DOD. Chairman Mac Thornberry plans to move forward with further efforts to foster experimentation and prototyping, both in developing technologies and in how they are applied.

So back to the recent HASC hearing … one of the goals of the hearing was to identify ways Congress can support the efforts of DOD in achieving this sought-after agility. My theory is, there is no reason this has to stop at DOD and can’t be a government-wide focus. Beyond DOD, legislation has been introduced to not only strengthen key aspects of acquisition throughout the federal government, but provide the stability that is so essential to increasing the agility of the government overall to deliver the right projects and programs at the right time. The Program Management Improvement and Accountability Act of 2015 (PMIAA) was passed unanimously by the Senate at the end of 2015, and is currently under consideration in the House Oversight and Government Reform committee, led by Chairman Jason Chaffetz, R-Utah,(R-UT)​ and Ranking Member Elijah Cummings, D-Md.(D-MD).​ This legislation is the first step in bringing the stability to agility that will make it work, not only in DOD, but for the whole federal government.

The Pentagon and Silicon Valley need to team up. Ignoring the role of institutional venture capital in identifying, supporting, and scaling the most promising commercial technology firms is at best inefficient and at worst it is grossly irresponsible.

How can governments prepare for bioweapon attacks?

The tools needed to test, trace and treat both natural and intentional viral outbreaks are similar. But as future bio-attacks may be coordinated with financial, cyber or kinetic actions, the need for the military to sustain robust and dedicated capabilities to counter biothreats is paramount.

Lessons learned from the pandemic in modernizing public health systems

Agency leaders from Ventura County, California, and Winnebago, Illinois, spoke about how they transformed their technology infrastructure and processes to handle COVID-19 and how they plan to replicate and scale these changes to impact service delivery beyond pandemic-related needs.

The Federal government understands the significance of remote access on meeting mission objectives now and in the future. Agency leaders are looking to the private sector for technology that helps them maintain the highest security levels while meeting the ease-of-access demands of today’s worker – and can be implemented quickly.

Leaders must ensure that federal agencies are data-ready

Are agencies ready to support a workforce fully armed with data, or could they experience too much of a good thing?

Union leaders said exclusion from remote work fails to consider how reentry imposes commuting costs amid soaring gas prices and hardships on employees who are caregivers.

The Air Force says a continuing resolution could slow down its plans to award a contract for the E-7 Wedgetail in February.

The Omnibus IV contract addresses four market segments that companies could be selected to provide services to the DoD: research and development; R&D support services; regulatory processes; and translational science and support services.

“This acquisition is an important step in the execution of QinetiQ’s five-year ambitions to expand our presence in the US,” according to the company’s CEO.

Why do federal pay raises lag the private sector?

For federal retirees, COLA is not a retirement panacea for inflation

5 things every first-time bidder for federal contracts should know