Defense spending decreased by almost 31 percent between 2011 and 2015, while civilian obligations remained steady, according to an analysis of governmentwide contracting by the Government Accountability Office.

Meanwhile, the civilian agencies with the highest obligations on contracts during that same time period — led by the departments of Health and Human Services, Homeland Security, Justice, State, Commerce, and Transportation, as well as the U.S. Agency for International development, General Services Administration and NASA — spent around $136 billion on services and $40 billion in products for 2011 and $127 billion on services and $36 billion in products in 2015.

Professional support services accounted for the top services procurements at both defense and civilian agencies, followed by maintenance, repair and rebuilding of equipment for defense agencies, as well as IT and telecommunications for civilian agencies. The construction and operation of structures and facilities also factored into each sector

Top products were aerospace craft and structural components for defense agencies, as well as medical, dental, and veterinary equipment and supplies for civilian agencies. 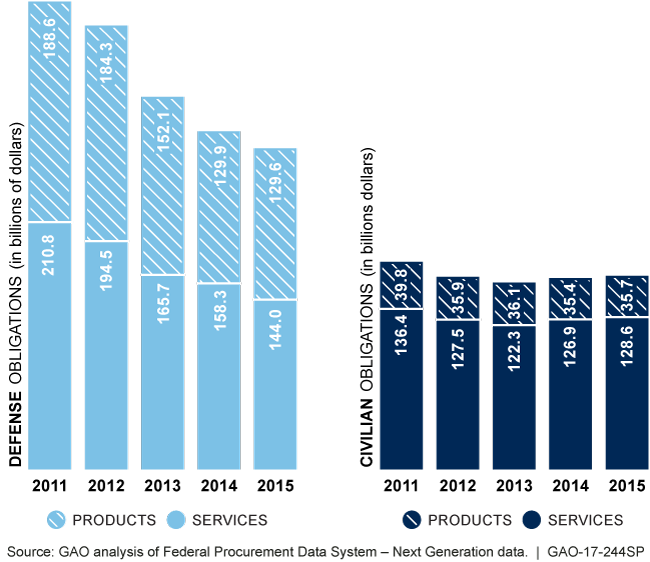 Photo Credit: Government Accountability Office
Of those obligations, competitive contracts remained relatively steady, rising from 75.8 to 79.4 percent for civilian agencies and decreasing from 58.4 to 55.4 percent for defense organizations. Fixed-price contracts made up an average of 63 percent of obligations.

GAO feels that the initiatives Congress and the administration have taken to simplify and strengthen procurement practices and enhance oversight of contract spending have reduced government waste and risk for the $430 billion obligated in fiscal 2015. Lessons learned from reviews can help duplication and increase savings, with professional and management support services needing particular attention.

All analysis was derived from the Federal Procurement Data System — Next Generation, the government’s procurement database, and prior GAO and inspector general reports.

The complete report, with many breakdowns of specific agency obligations, can be accessed on GAO’s website.

About 240,000 veterans nationwide were looking for work last month but unable to find steady employment.

The Army this week declined to discuss its FLRAA decision with lawmakers, citing the protest period.

US to send Ukraine longer-range bombs in latest policy reversal

The U.S. will provide ground-launched small diameter bombs as part of a $2.17 billion aid package the U.S. is expected to announce Friday.

There are no immediate plans to shoot it down, due to concerns about debris. But steps have been taken to prevent the collection of sensitive information.

Senators won't greenlight the F-16 sale unless Turkey allows Sweden and Finland into NATO. And at least one is calling for sanctions over the impasse.

Can you get an abortion at a VA clinic?

Why US federal fiscal year 2023 starts in October

Tell us: How has work attire changed at your federal agency?

TSA employees could get a pay bump under new spending bill